surviving motherhood in the “middle ages”

You know that when you’re pregnant you tend to go to the bathroom a lot…since everything is pushing on your bladder. Recently I’ve been going to the bathroom at least 2-3 times in the middle of the night. Someone joked that it was your body’s way of getting ready for sleepless nights when the baby arrives.

Well, the other night as I got up to make my nightly bathroon run, I stood in the hallway with my 2 hands on the wall trying to steady myself. Yes, the room was spinning, a lot! I stood there for a few minutes then carefully made my way to the bathroom. When I got back to the bedroom, I woke Mr. MaD up to let him know that I was really dizzy.  I thought maybe it was my blood sugar. I wasn’t sure since I didn’t have my consultation and class for gestational diabetes yet. I decided to eat some multi-grain crackers, a very small banana and a few pieces of chicken.  Strangely, I wasn’t hungry so I actually forced myself to take a few bites of each. In fact, I was nauseous. After almost 1 hour of just lying around I finally got to sleep.

The next morning I woke up a little dizzy again. Nothing like the night before but still not regular. I decided that breakfast might help so I ate a piece of fruit with whole wheat toast and a slice of cheese. I also decided to take my blood pressure. It was something like 99/64.

After about an hour, I decided to call my doctor. According to him, it was probably a case of low blood pressure and/or dehydration. He told me to sit up on the bed before standing up and make sure I’m drinking enough water. He actually said it is very common during pregnancy. This seems strange to me since I had pregnancy induced hypertension the last time I was pregnant. He also mentioned that it can happen if it’s too hot.  He did warn me that if I’m driving I need to pull over and I should lie down until the dizziness subsides.

I must say it was a little scary being so dizzy. I hope it doesn’t happen again, esp. if I’m driving.

P.S. Today was my consultation for my gestational diabetes. Basically I got weighed ( I only gained 1 lb. in 2 weeks!). I had to give a urine sample and blood. I got my blood pressure checked, my pulse, and my temperature. Then a doctor gives a brief overview of gestational diabetes and takes a quick medical history. I think it’s mostly to see if anyone in your family had/has diabetes. If you have gestational diabetes, you have a 50% chance of developing diabetes in the next 5 years so they really want you to get tested for diabetes every year. I also have to take a glucose tolerance test 6 weeks after giving birth to see if the gestational diabetes was pregnancy induced or if I had diabetic tendencies prior to getting pregnant but didn’t know it.

The funny thing is that when I went to my regular OB visit today, he mentioned that it’s strange that I got gestational diabetes since my weight is so much better this time around. Remember I mentioned that I was 25lbs heavier the last time I was pregnant. Well, he said sometimes it’s just the placenta that causes it.  Strange…I guess every pregnancy is just so different.

Tomorrow is my 3 hour class for gestational diabetes. Supposedly they go over the meal plan and lifestyle changes like exercising for 30 mins. a day. Also, they go over pricking your finger to read your blood sugar levels. I’ll post more about it later.

Whew! This Thanskgiving flew by…it is just a blur now. This year we went to our in-laws for Thanksgiving dinner. I made 3 semi-homemade desserts. The first was pumpkin muffins (recipe from Cooks.com) with store-bought cream cheese frosting. The second was apple crisp using canned apples (Comstock). The third was a chocolate bundt cake (cake mix) with homemade cocoa glaze.

Wondering why I would bake if I have gestational diabetes? Well, remember I do enjoy baking. Mr. MaD was my taste tester for the muffins and chocolate cake. Apple crisp is one of my go-to recipes so I didn’t need any taste testing for that.  My thanksgiving dinner was restricted. I limited my carbs (stuffing, mashed potatoes, yams, etc.) and I had no desserts including fruit. Yes, I was disappointed. I watched my portions and I didn’t have 2nds.  Believe me…I’m already looking forward to next Thanksgiving and the food that I will be able to eat. On a positive note, I didn’t feel that fullness that often comes with holiday meals.

We did not go out since I was so tired and I know she was also. Instead, we sent Mr. MaD out to do some shopping. He went out early to get our new microwave on sale at Sears. He went to Old Navy and got some pjs for Princess and he attempted to visit the Disney store which ended up being so crowded that he left. Later that day he went to Comp USA to look for a deal on external hard drives. On the news we saw that Comp USA had a sale on Thanksgiving night that we didn’t know about so we thought they’d still have some good deals the next day. As it turns out the salesperson said that the better quality hard drive was not on sale but would be going on sale in the near future. Mr. MaD also made the trek to Wal-mart to pick up another Christmas present for Princess, a kitchen. It’s the new Play ‘n Learn Little Tikes Kitchen. Well, they were out of the one we wanted so he ended up getting her a Fisher Price Dora kitchen. To be honest it’s not the one I really wanted esp. since sometimes Dora’s voice irritates me. (Sorry, Dora fans) I asked Mr. MaD to turn off the talking feature on the kitchen.

As it turns out, Mr. MaD decided to put the kitchen together for Princess as her early Christmas present partly because the box was dirty and he didn’t want to store it that way. Princess loves her new kitchen. She plays with it every day. It’s the thing that she looks at as soon as she gets up in the morning. Her favorite thing is to bring the plastic pretend foods to us and ask us to eat them. So we politely eat them and say “yummy”.

On Saturday, we went to a 1st birthday party for a little boy who comes to our church. I think this was the most fun that Princess had at a birthday party. There was coloring on the fabric backpack (given as a favor), bubbles, air brush tatoos, remote control race cars, a bounce house, games, and a pony ride. The theme for the party was the movie Cars. Bubbles turned out to be one of her favorite activities along with the pony ride. Yes, she did ride the pony. It totally surprised Mr. MaD and I since she is often afraid of unfamiliar things. She couldn’t wait to get on it and she wanted to pet it and she even hugged his face. It was the cutest thing ever! She had so much fun at the party that she barely took a nap probably reliving the fun events of the day kept her too busy to sleep. (Here’s a picture of Princess with a disguise on to hide her face.)

So here’s the thank you card that I made for my baby shower. The diaper is made from textured cardstock. This cardstock has a butterfly design embossed into it. I made a diaper template and used a stamp to add a graphic on the diaper. Most diapers have pictures on them. Then I added some patterned paper for contrast. I used a flower punch with a rhinestone for the diaper tabs.

P.S. I updated the girl birthday card post with a new picture. I hope you can view it. 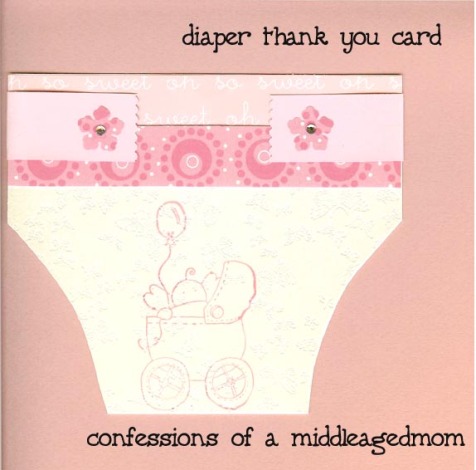 Well as it turned out I failed my 3 hour glucose test…so I guess that means I have gestational diabetes. I must say that I am bummed! I really tried so hard for 2 weeks to watch my diet. I cut out all juice and soda. I limited my sugar intake and if I ate any sweets it was sugar-free.  In fact, I only gained 1 pound in the last 2 weeks. Oh well…

Now I have to attend a consultation and a 3-hour class at the hospital. I guess that means I’ll have to restrict my diet and start pricking my finger to test my blood sugar levels. I am not looking forward to this at all, especially since it is the holidays and as you know I really enjoy baking. Maybe I need to search out some sugar-free/sugar substitute recipes.

I’m going to try to enjoy my Thanksgiving meal while watching what I eat. I think it’ll be tough…especially, resisting dessert. I wonder if it’s okay to have just a tiny bit of dessert?

I’ll post an update after I attend my consultation and my 3-hour class.

I guess my first cookie recipe didn’t go over so well…I haven’t had any comments or any recipies from anyone. Oh well!

Here’s another recipe that I’d like to share. It’s from Sam Choy’s pastry chef. Sam Choy is a chef from Hawaii, just in case you didn’t know. These are delicious, esp. if you love chocolate and nuts.

Cream together butter and sugar. Add flour, then nuts. Press into parchment lined 9″ x 13″ pan. Bake at 350 degress for 15 minutes.

Sprinkle chocolate and nuts over crust. Combine vanilla with condensed milk and spread over chocolate and nuts. Bake till golden brown for approximately 25 minutes. Cool completely and cut into small bars. Roll in powdered sugar.

Here’s a girl birthday card that I made for a recent 2nd birthday party that Princess was invited to. I didn’t include the inside since it just said the usual “Happy Birthday to you!”

Next Page »
Confessions of a Middleagedmom
Create a free website or blog at WordPress.com.