surviving motherhood in the “middle ages”

I hate to bring up such a personal question, but frankly I don’t know where else to turn.

As a middleagedmom, I’ve been using Tampax for quite a few years.  A few years ago (maybe 2 or so) they decided to change the design of their tampons. Well, as it turns out this new design is flawed. I won’t get  into details but it is the most uncomfortable product ever. I’ve been looking at a lot of reviews/comments on the web regarding this same issue. I’ve even visited the Tampax to share my “disappointment” (maybe it’s disdain) with their new design.

Why am I sharing my thoughts 2 years after the design change? Well, I had a stash of the old design and I was also pregnant so I didn’t need to try the new design until only recently. Yikes!

So my question is this…does anyone know of another brand that is similar to the old design of Tampax cardboard? I’ve searched high and low for any boxes of the old design but I’ve been unsuccessful.  So, now I am in search of a replacement.

This was the short but “sweet” conversation I overheard Princess having with her Mickey Mouse toy cell phone.  I asked Mr. MaD, “Did she learn that from us?”

Maybe the old adage, “Children learn what they live.” is really true.

P.S. I have no idea what Mickey Mouse must’ve been saying to her!

Please, I beg you, learn from me!

I also tell people that I have “mommy brain” because that’s what I feel like. I don’t mean that as a put-down to us moms. I just mean that my life is so busy and my mind is on so many things that I don’t always have the clarity of mind to make the best decisions or ponder deep thought-provoking questions.

But…today I take the cake!

I know now that my “mommy brain” is in full swing.  I happened to be working on a photo collage for my daughter in Photoshop. So, I started looking at all my digital photos so I could choose appropriate photos for the layout. I happened upon a photo of Princess’s first gingerbread house and thought to myself, “I should add some pictures of Princess making her gingerbread house.”  I searched my external hard drive, my CDs, my flash drives, and my camera’s memory sticks. 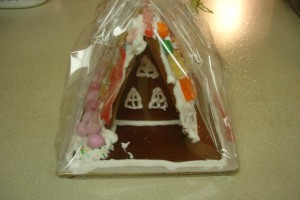 To my utter dismay, there were NO pictures of the great event! They are completely gone! I wanted to scream but Baby was taking a nap so I just started seething with anger crying to myself. I couldn’t  believe it! Just a few days ago, I was downloading photos to CDs and my external hard drive.  Thinking that all my photos were downloaded, I began to delete pictures from my camera’s memory stick.

Yes, I believed whole heartedly that I had saved all the photos on that memory stick that I didn’t bother to double check myself.  Well, now I know better.

Even if you download your photos ( to CDs, flash drives, and hard drives), check and double check yourself to make sure that those photos are where they are supposed to be. Also, have a back up of them in different places. Don’t just save to your computer! Should your computer crash, you will lose it all.

I am so sad…I have forever lost those precious photos from Princess’s first gingerbread house experience.  Boo, hoo, hoo!

Do “bad” things happen in three? If I were superstitious I would really be on a roll!

1. Our vacuum cleaner died out on us. It was a Hoover upright that we got from Costco maybe 5 years ago.  We made good use of it but I was hoping that it would last longer.

2. Just about 4 weeks ago our computer monitor died out. It just started fading out and turning black with some funky waving in between. It kind of reminded me of a lava lamp. Being offline was difficult for me and Mr. MaD.

3. Just about 2 weeks ago our washing machine died out! Can you believe it! It was a Kenmore Calypso. It was about 6 years old. It has an electronic control panel.  The tub doesn’t have an agitator in the middle so it’s pretty roomy. While trying to start a second load, it just wouldn’t turn on.

So what did I do? Since I needed some clean pajamas for Baby I was forced to wash some by hand.  No fun! Just think that’s probably how my grandparents had to do it years ago. We were able to do a few loads at my MIL’s house.

So we ended up getting a new vacuum cleaner. Living without a vacuum is not a pretty sight especially with 2 little ones. After Mr. MaD did some research, we settled on a Filter Queen canister vacuum. It has great suction and a lifetime warranty. It filters up to 0.3 microns. (If that means anything to you.) It was not cheap but we didn’t want to keep investing in new vacuum cleaners every 5 or so years.

Yes, we did get a new computer monitor. Initially, Mr. MaD asked me if we should get a whole new computer. I emphatically said, “NO!” Although I would love a newer faster model, we just can’t afford it. So we settled upon an Acer monitor that we got from Best Buy for less than $150. It’s great! Living without a monitor for approximately 1 week was so painful! Can you believe how dependent we are on the internet and email!

As for the washing machine, we did some investigation and came up disappointed. Initially I wanted a front load machine, but after reading some many reviews we found out that they have so many problems with leaking or water not draining properly then stinking. We also found out that there was some kind of lawsuit against front loaders. Then we looked in Fisher & Paykel machines. They have a plastic lid which was a little strange. I actually liked most of the reviews but I was disappointed about the size of the wash tub and the difficulty in using bleach in your laundry. Also, I was worried about washing our comforters and blankets in it. Finally, I told Mr. MaD to just get an estimate for fixing our washer.  He  found out that there was a lawsuit against our washer too. Of course we didn’t join in the lawsuit because we didn’t know about it. But as it turns out, if you didn’t participate in the lawsuit, you can get some kind of reimbursement from Sears when you get your machine fixed or even looked at.

I sure hope we can just fix it for minimal cost. This weekend will make 2 weeks of  living without our washing machine.

All of this hasn’t made me superstitious but it has started me thinking that I need to bring in some income into this family!

How has your life been treating you?

Last week I went to Starbucks for a coffee. It was a treat! It was actually a pick-me-up too because I was so exhausted and I felt like falling asleep when I was behind the wheel. Boy, did it help!

I tried something new…iced cinnamom dolce latte. It was delish! Of course, I did get it with some whipped cream on top. Usually, I stick to my old stanby drinks, either cafe mocha or iced mocha. I know, so boring!

I also tried their mini vanilla bean scone and a bar of dark chocolate. I thought the scone was just the right size. It was a little on the sweet side but very moist. I had recently heard that the Starbucks chocolate was pretty good so I tried it for myself. I have to say that it was pretty good but I have tried some other chocolate that I liked better. If you’ve ever been to New York City, I would suggest trying Maison du Chocolat. I think they may even sell it at Neiman Marcus.

Did you wear green yesterday? I did. I was too afraid of getting pinched.

In the good “ole days, my fellow classmates in elementary school were quick to remind each other of the importance of wearing green on March 17th. If you were the the poor child without green anywhere on your person, you would soon find yourself with a ton of red spots on your arms where you friends pinched you. I wonder if they still do that today? Is there even any significance of getting pinched for not wearing green? Or is it just an excuse to hurt your fellow classmate and be a bully?

I also dressed Princess in green yesterday, just in case.

Yesterday was the first time I tried to cook corned beef and cabbage. I used a prepared corned beef that I picked up at the supermarket. I also cooked some carrots, potatoes, and cabbage.  We enjoyed our corned beef and cabbage with prepared mustard. Yum! Although the taste was good, I think I could’ve cooked the meat a little longer to make it more tender. I’ve come to the conclusion that the setting on my stove that says, “simmer” is to low to really simmer. Oh well, there’s always next year.

Did you enjoy some corned beef and cabbage last night?

P.S. I happened upon Martha Stewart’s corned beef and cabbage on her show yesterday. It looked yummy and really tender. I need to get that recipe!

Next Page »
Confessions of a Middleagedmom
Blog at WordPress.com.